Each beautiful reproduction is made individually on a profesional grade Giclée printer by Joy Day of Spherical Magic, ensuring the highest quality and longest life. Reproductions are printed with archival ink rated at 100+ years on smooth,  archival paper and signed by hand. Prints are unframed and shipped rolled in a tube. Every effort will be made to fill your order within 10 working days of purchase. Purchases are made via PayPal. Click here for terms of service.


To Purchase, Click on the Image of Your Choice 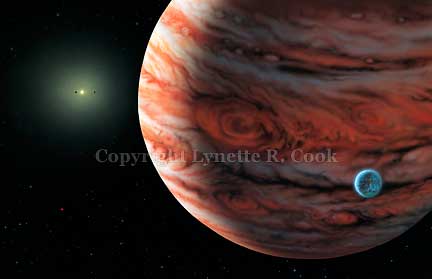 55 Cancri: Several confirmed planets orbit the star 55 Cancri. Shown here close up is the outermost world with a hypothetical icy moon. Three inner planets are shown as tiny spheres on both sides of their parent star.

DNA Galaxy: A spiral galaxy metamorphoses into the DNA double helix. Chemical structures and chromosomes are visible near this structure, symbolic of life in space.

Galaxy Puzzle: This image represents the puzzle scientists are trying to solve regarding the dark matter in the universe.

HD 114762 b: Sometimes classified as a brown dwarf, this large planet of 11 Jupiter masses orbits a yellowish main-sequence star that lies in the constellation Coma Berenices.

Lalande 21185 System: Two Jupiter-like planets may be orbiting Lalande 21185, a red dwarf star just 8.25 light-years away. From the surface of a hypothetical moon we can see both planets and their star.

The Search for Extraterrestrial Intelligence: This represents the state-of-the-art technology used to detect radio signals from intelligent life elsewhere in the cosmos.

Transit of HD209458: HD 209458 b was the first extrasolar planet discovered by two methods: from the wobble of its star and by observing a dip in the star's light as the planet passed in front of its star.